Home › Addiction › The Ballad of Songbirds and Snakes

The Ballad of Songbirds and Snakes 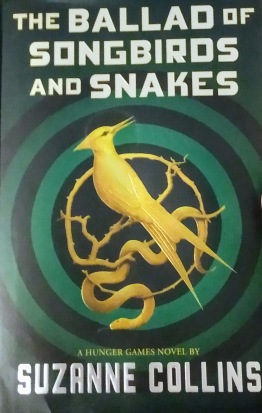 So here’s the long-anticipated prequel to the Hunger Games trilogy. Coriolanus Snow is in his final year at the elitist Academy, training ground for future leaders of Panem. He is fortunate to be there because although he is charming, intelligent and recognized as a member of a powerful Capitol family, he lives a life of hidden poverty, relying on the free tuition and perks afforded to Academy students to maintain a tenuous illusion of prosperity. The war that ended ten years previously took not only his father’s life but also his family’s fortune when their lucrative munitions factory in District 13 was bombed to smithereens. Although he, his grandmother and his cousin Tigris remain in the luxurious Snow penthouse, they have little to eat and few resources beyond what can be made from Tigris working for low wages at a fashion house or from quietly selling off furniture and other possessions.

Coriolanus is aware that his only hope of success lies in being awarded the prize of top honor student at the Academy, which will ensure his tuition-paid acceptance into the University. To that end, he carefully cultivates relationships with influential professors and schmoozes adeptly with fellow classmates and others of high social prominence to keep a competitive standing among the prize contenders. When it is announced that, for the first time in the history of the Hunger Games, Academy students will be assigned as mentors to the district combatants, he sees this as an opportunity to shine, until he realizes he has been assigned a fighter from one of the worst districts in Panem–a young girl whose skills seem to be musical rather than athletic. How can he prevail as the strongest mentor–and thus most deserving of the top honor prize–with the odds seemingly (and purposefully) stacked against him?

This 517-page-turner does not disappoint (and this comes from someone who generally hates prequels). The character development of Coriolanus is nuanced and complex, and the plot development keeps surprising you right up to the very end. Suzanne Collins is a masterful writer–one of the finest in the YA genre, though I hesitate to assign her to that category alone. Her deftly articulated theme of chaos-control-social contract makes this book worthwhile reading for all ages.  It definitely makes it a must-buy for any school library.

Lots of violence. No sex. One sentence referencing a possible same-sex attraction. That’s it.