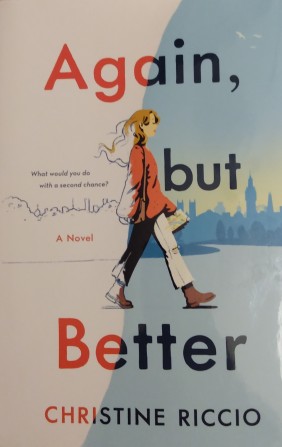 After two-and-a-half years of college, twenty-year-old NYU pre-med student Shane is taking a semester off to fly to London for a creative writing program. Her parents think she will be studying medicine because she created a phony brochure advertising such in order to get their approval for the trip.

Since she was small, her parents have channeled Shane’s activities towards becoming a doctor, and she has dutifully allowed her interests to be hijacked because, as her dad says, he is paying the bills and she needs to have a marketable, professional skill. Her mom, who had aspirations of being a doctor herself, dropped out of school when she became pregnant with Shane, and she is reliving her dream now through her daughter. There’s no arguing with them.

Shane, though she makes excellent grades, has been lonely at college, spending most of her time in classes or alone in her room studying or binge-watching her favorite TV shows (like “Lost”), reading her favorite books (like Harry Potter), or journaling. The two roommates she was assigned when she started NYU have signed up to room together next year without her, and she has no other friends there. She’s never had a boyfriend, never been kissed, never explored New York City or, frankly, anywhere else. Every weekend she goes home to her parents and relatives (that include some very obnoxious male cousins). This study-abroad program is going to be her chance to make significant changes.

Shane jumps into her self-improvement program with enthusiasm, giving herself pep talks as she works at being the new extroverted Shane with her two roommates, Babe and Sahra, and the two guys, Pilot and Atticus, who share the flat’s kitchen. They travel! They party! They explore the city! Shane learns to drink a lot like the other twenty-somethings, becomes smitten with Pilot and has sex with him (her first time ever!). Life seems good until things fall apart when surprise visits are made by parents and Pilot’s girlfriend.

YA readers will be swept up in this story of reinventing oneself, finding your tribe, defining your life goals, etc. Halfway through the story is a time-travel twist that echoes “Groundhog Day” and just about every Meg Ryan movie you ever saw.  Sexual references aren’t graphic. Offensive language is pretty pervasive, however. (Even God doesn’t rate a capital letter with this writer, though she does capitalize “Jesus Christ” when she uses the name as an expletive.) These are all things to note before deciding on a purchase for your particular library.