Home › Books We Recommend › The Undoing of Thistle Tate

The Undoing of Thistle Tate 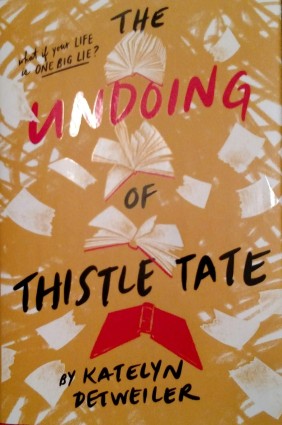 Seventeen-year-old Thistle Tate is known as the author of runaway best-selling YA series LEMONADE SKIES, the story of a teenage girl who’s discovered a portal into the Afterworld that she hopes will lead to a reunion with her mother, who passed away when she was very small. The series is autobiographical, because her mom did indeed die in a car accident when Thistle was three years old. Home-schooled by her widowed father, Thistle leads a somewhat reclusive life revolving around her lessons, reading, TV binge-watching and such. She has one true friend, Liam, who lives next door and whom she has known since they were four.

Her father, having tried various jobs with little success and harboring hopes of being a published author despite countless rejections of submitted manuscripts, writes a YA novel but submits it under his daughter’s name. The book is a wild success, and sales allow them to stay in their family home and stop worrying about finances. The two of them travel around the country doing promotional work after the publication of each volume, while Thistle monitors social media responses to the series.

Thistle wants a normal life. Her father promises that after the third and final book comes out (after she graduates high school and before she heads off to college) their “collaboration” will end and so will the Lemonade Skies series. A chance comment her father makes to their editing and publishing handlers, however, indicates he may not keep that promise .

Meanwhile, her relationship with Liam evolves into a romance. She then becomes romantically involved with a fan she meets at a book signing (and also with his seriously ill sister). As you might expect, her life becomes almost unbearably anxious and guilt-ridden by the lie she feels she must maintain.

This is one of the best books I’ve read this year. Its thoughtful examination of issues relating to parental responsibility, depression, loss, changing dynamics of relationships, accountability, and–most importantly–honesty will resonate with all readers. The characters are interesting and relatable but not simplistic. Librarians ought to be aware that there is some offensive language (besides the now generally-accepted damn, hell, and ass) that includes fucking, shitty and religious profanity. (Sidebar here: In the Northeast it seems to be common to use “Jesus Christ” as a pejorative. This isn’t true elsewhere in the country. YA writers ought to take note of that.) There is no sex in the book other than one scene where clothes are removed and enjoyment is had without boundaries being crossed.