Home › Civil Rights › Opposite of Always 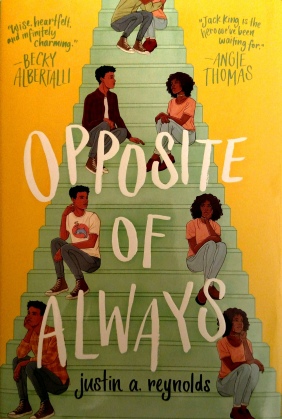 Eighteen-year-old Jack King’s two best friends in the world are Jillian and Franny (Francisco). Unfortunately, Jack has been in love with Jillian since they met at the beginning of freshman year at Elytown High, though she is unaware of how he feels. It doesn’t matter, though, because Jack is fiercely loyal to Franny since they bonded as friends as seven-year-olds, and he would never make a move on Jillian.

Jack and Jillian travel out of town together to check out Whittier College. (Franny expects to go to State instead and doesn’t accompany them.) While at an informal get-acquainted party, Jack, who is not exactly a bon vivant (never having had a girlfriend and being decidedly awkward in the social graces), plants himself on some stairs during the party and spends his time nursing a drink and watching Jillian. Enter Kate, who strikes up a conversation with him and quickly enthralls him with her wit and charm. Their conversation continues til dawn, and before he leaves town he exchanges phone numbers for future texting.

Once home, Jack can’t stop thinking about her. He decides to invite her to the upcoming senior prom. When prom night arrives and she doesn’t show up as she promised, Jack frantically tries to find out what has happened. When he discovers her Big Secret (she has sickle cell anemia), events transpire that cause him to repeat history with her five times before he manages to get her cured. (Think “Groundhog Day.”) In the meantime he manages to wreck then repair his relationships with Jillian, Franny and his parents and learns some important lessons about using time (when he has it) to express love appropriately to those around him.

This book is kind of a mess. The repartee between Jack and Kate is sappy and relentlessly silly. Their sudden intense relationship strains credulity. Jack’s recurring episodes don’t flow together well. His managing to win $200,000 by gambling on a basketball game (by using Franny’s ex-con dad to place the bet) and then arranging medical treatment for Kate with a renown specialist isn’t realistic at all. Maybe YA readers will love it but I surely didn’t. The characters just don’t ring true.

Offensive language includes the usual asshole, douchebag, hell, damn, dick and such, with all their various iterations. There is some religious profanity. Sexual references are not infrequent though there are no graphic descriptions. Teenage drinking, gambling, parental divorce, some violence arising from anger and frustration, and prison life are all subjects touched on in an even-handed manner.