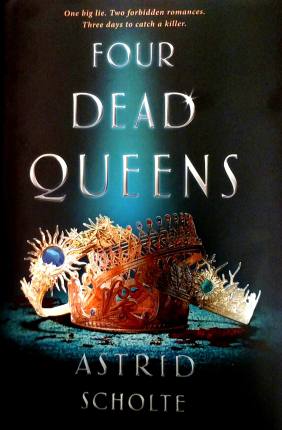 This 423-page fantasy novel is set in a land called Quadara, a land once ruled by a single king but now devolved into four separate quadrants, each represented by its own queen.  The quadrants follow the Henry Ford philosophy of specialization:  one is responsible for agriculture, a second for arts and leisure, a third for science and technology, and the fourth for commerce and exploration.  The four queens, once ascending to their respective thrones, are sequestered for life in a central palace and jointly administer the Queenly Laws which rule the whole of Quadara.  The nominal heroine of the book is 17-year-old Keralie Corrington, a citizen of the Toria quadrant, who has degenerated into a thief and liar alienated from her birth family.  She inadvertently becomes involved in a plot to murder all four queens and install a single descendant on the throne, another teenage girl who is power hungry.  As one by one the four queens are killed, Keralie races to break the mystery and (incidentally) secure a particular favor she desires for herself.  She acquires a handsome teenage assistant from another quadrant and a romance ensues.  After much back and forth, the two succeed in solving the mystery, repairing Keralie’s relationship with her family, and moving forward into a joint life of their own.

There are some instances of coarse language in the book, primarily usage of the word “shit.”  There is violence, gruesomeness, and a little horror.  Homosexual relationships are presented as matter-of-fact (if not in glowing terms).  There is heterosexual innuendo.  Probably 75% of the characters exhibit no particular moral values, although a few are consistently/traditionally honorable.  Friends use and betray each other.  The plot hinges on a curious “the-devil-made-me-do-it/I-had-no-choice” twist that some readers may not like.

I say Keralie is the nominal heroine because it seems every character in the book has a complicated back story which the author wants to include.  This makes it hard to keep everybody’s stories straight and doesn’t allow any particular person to rise above the pack.  There also is some wise-cracking banter which seems out of sync with the fantasy nature of the story.  (I guess maybe we have Star Wars to thank for this.)  The book is reasonably fast-paced but has some plot developments that don’t ring true.  Overall, considering the writing and the aspects mentioned above which some may find problematical, I would not spend limited library dollars on this one.