Home › Addiction › On the Come Up

On the Come Up 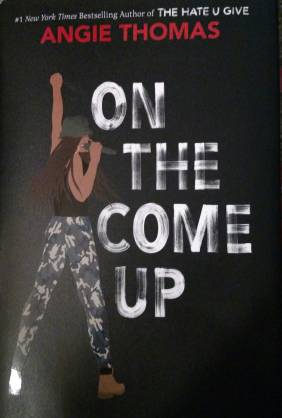 This story opens with sixteen-year-old Brianna (Bri) Jackson dealing with a lot of worries.  Her dad, once a rising rap star on the underground scene, is twelve-years-dead from a gang-related shooting, having left the family his famous name, a prized gold/diamond chain, and not much else. Her mom, a recovering drug addict, is barely managing expenses for the family by working as a secretary at her neighborhood church. Her brother Trey, a recent college graduate, can find employment only by working at the neighborhood pizza place, despite having an impressive academic record. Her aunt is dealing drugs. Food is scarce. Utilities get turned off and on. Rent is overdue. Her shoes are falling apart. Things are bleak.

At the Midtown School of the Arts, to which Bri, her best friends Sonny and Malik, and a core group of other minority students have been transferred in order to create an educational climate of “diversity” (and concomitantly bring in some serious grant funding), Bri finds herself frequently suspended for various behavioral infractions that provoke merely a slap on the wrist for white students who do the same things.  Her anger and frustration boil over when she is challenged by two school security guards for refusing to turn over her backpack for examination. (She’s got contraband candy in it that she’s selling–against school rules–to other students in an effort to make money to help her mom.)  When she is thrown down to the ground and cuffed with plastic ties, all is captured on camera by watching students.

An aspiring rap artist like her dad, Bri builds on this outrage and frustration to create an original work (“On the Come Up”) that she delivers at an underground rap competition. That performance is filmed, posted to YouTube, and widely disseminated.  She becomes locally famous, captures the attention of her dad’s old manager, and, without her mom’s knowledge, embarks on a hopefully lucrative professional career that will solve all problems.  As she does so, fundamental questions about what she is doing challenge her: Is it fair that people assume that she is who and what she raps about? By “playing the role,” does she just become “that angry black girl from the ghetto?” or does she set aside her personal identity to present a situation that demands recognition and corrective action? Can she be true to herself and inauthentic to the audience? Can she “save” her family by being dishonest and evasive with them? Does she help herself by choosing not to be involved in what is going on around her?

Angie Thomas hits on so many important topics in this book. It is gratifying to see positive resolution of big problems. Characters are believable and generally likeable. Language is a BIG issue in that “fuck, ass, shit, damn, hell” and all their many iterations are used as frequently as “a, an, the” on just about every page until the final few chapters when, interestingly enough, we see the fruition of Bri’s gradual self-awakening. There is some religious profanity. Sexual references and scenes are infrequent and not likely to offend. Gang violence and threats are presented realistically.