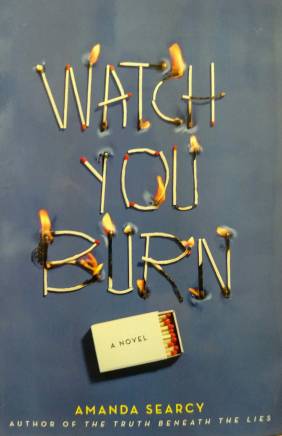 When seven-year-old Jenny Breland goes on her very first sleepover at a friend’s house, a catastrophic fire in the middle of the night destroys the house and everyone but her in it. Though the fire is declared of unknown origin, Jenny is never invited over to classmates’ houses after that.  Years later Jenny’s half-sister, Hailey, accidentally catches a kitchen towel on fire while trying to cook a surprise for their mom. Jenny reacts by crawling into a corner instead of helping put it out. Though Hailey really is responsible and no serious harm is done, the incident reawakens a compulsion in Jenny. Soon afterwards, she sneaks out at night, breaks into an abandoned house, and sets it on fire.  Her stepfather Brian, a firefighter, catches her returning in the early morning hours. His suspicions confirmed that his stepdaughter is indeed an arsonist, he forges signatures on the investigative report to cover for her and then he and her mom ship her off to New Mexico to live with her father, whom she hasn’t seen in years.

At her new school she makes friends with two girls hiding their own very profound secrets, wrangles with her dad’s architect/lover/business assistant (and the good-looking guy she employs to track Jenny’s movements), attracts the unwanted attention of a police intern, and becomes romantically involved with a recovering drug/alcohol addict, all the while managing to set a few fires in the surrounding area.

This is an extremely thoughtful, well-constructed psychological thriller. Characters come under suspicion for a variety of offenses, including murder, arson, drug trafficking, blackmail, intimidation, bullying, and child/wife abuse. All the intricacies of family dynamics and of friendship are examined. The most fascinating aspect of the book though is its compelling depiction of the arsonist personality and the overwhelming addictive power that controls him/her.

Language in the book that might offend includes shit, bitch, assholes, dammit, hell and maybe one f***.  Violence in varying forms necessarily moves the plot along. Sexual references are few and not explicit.