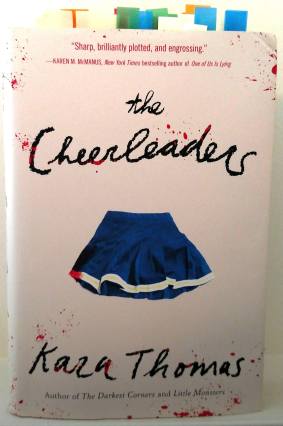 Five cheerleaders from Sunnybrook High die within two months of each other from a car crash, a suicide and a murderous attack—at least that’s what Monica Rayburn (younger sister of one of the cheerleaders) and the rest of the world believe.  The five-year anniversary is coming up and Monica is a wreck.  After breaking up with her boyfriend who is headed off to college, she takes a summer job at the local country club, has an affair with the lifeguard (who then turns out to be the new Sunnybrook cross-country coach), undergoes an abortion, and overall finds herself not dealing well with life.

Monica’s stepfather Tom is the cop who shot and killed the neighborhood predator who supposedly murdered cheerleaders Susan and Juliana. He refuses to talk about any of  it. Her mother doesn’t talk about any of it. Everyone pretends life is back to normal. Since this obviously doesn’t work for Monica and since she needs answers, she goes snooping in Tom’s locked desk drawers looking for clues and discovers her sister’s cell phone as well as four mysterious letters saying, “I know it wasn’t him.”  She fires up the phone, sends off messages to an unknown contact, and sets off a complicated series of events leading to some startling revelations and a surprise ending.

There’s frequent offensive language, most of it tossed around thoughtlessly and casually as is so common these days.  There are descriptions of violent acts but nothing gratuitous or excessive. Even the (few) sex scenes between Monica and her coach-lover lack emotional punch (for reasons you understand as you read the book), as does Monica’s response to the abortion.  Suicide, bullying, school shootings, excessive teenage drinking, drug use, domestic abuse—this book has it all, but it’s well-written and keeps your interest. Most all of the characters show a gratifying growth by the end.