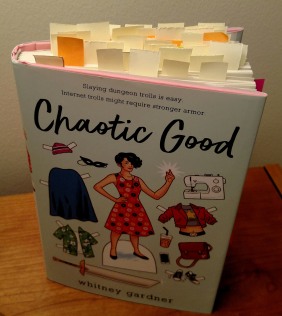 Cameron Birch and her twin brother Cooper have moved with their parents from Portland, Oregon, to Eugene, where her mother has accepted a job with the university and where her dad has retired to work in his garden.  Having recently won a major cosplay contest and, because of it, received major attention with her blogposts (not all positive), Cameron is focused on creating new costumes for the upcoming National Portfolio Review to wow the judges and secure a spot at CalArts once she finishes her senior year in Eugene. Her brother Cooper is recovering from a major romantic breakup and serious bullying issues from the past school year in Portland. Both are extremely close and support each other through their various trials, and both are hoping to make new friends in Eugene for a high school do-over.

Wandering into the only local comics store in Eugene to search for costume ideas, Cameron finds herself ridiculed for her lack of knowledge and sent summarily to the “girls’ section” of the store to shop. Furious over the disrespect, she and Cooper come up with a boy’s disguise and she returns the next day to get even with the guy who dissed her.  When she returns, though, she finds herself readily accepted as one of the group and begins to form some great friendships with the other “guys.”  The time never seems right to tell the truth about who she really is. Expected complications ensue, including her being pursued by two different people interested in romance, Cooper falling in love with one of the guys she rejects, online blog followers exploding her inbox with vile messages about her being a lightweight comics “pretender,” hurt feelings, betrayal of friends, and trust issues galore.

Readers will be interested in Cameron’s online blog experience, the cosplay angle, the Dungeons & Dragons stuff, the switched identity conflicts, the complicated romantic interplay, the tensions between Cameron and Cooper, and the suspense of Cameron being “found out.” There are some valuable lessons learned by all.  The parents are presented realistically but are pretty much kept out of the loop about most of what is going on, although Cameron and Cooper get some valuable glimpses into their lives as the book winds down to its end.

Sexual references are made but there’s no real action in the book.  Offensive language is pretty frequent and sometimes just plain filthy, particularly in the blog comments. LGBTQIA issues are addressed.